This is the first in a series of posts I’m going to put up, mostly to aid discussion by giving us some prompts and food for thought based on the dropbox archive.To start with, we’re going to talk about women on the fairground. The word ‘showman’ perhaps sound a little sexist, but most show-men would cheerfully admit that their way of life is hugely dependent on, and guided by, show-women – they are often referred to as ‘the backbone’ of ‘the business’.

Using a few images, I’ll try to explain why this is felt to be the case.

We’ll start in the Victorian era. True to the most cherished Victorian image of woman as home-maker, show-women cooked, cleaned and looked after their men and children. We see this in action here, in an image from the 1870s or 80s. A showground family has stopped by the road and the mother has made them something to eat and drink-

But there were a number of ways in which showground life allowed this woman and others like her to undertake roles and activities very different to the Victorian ideal.

Let’s take the case of two of my Great Grandmothers, both of whom were young women at the time this photograph was taken, and both of whom were expected to contribute to their family’s livelihood. First, on my Mam’s side of the family, we have (L-R) my Grandmother Amy Matchett and her sister Polly, posing for a promotional postcard.

From about the same date and on Dad’s side of the family, we have Miss Elizabeth Pinder and horse:

Amy and Polly were female boxers, who appeared on their family’s boxing show alongside their brothers (and the Matchetts were not the only family to feature female pugilists, many of whom would challenge local men to take them on in the ring). Now, not every show family in Glasgow has lady boxers in its past, but most can boast similar examples of women who, in a world of contortionists, sword swallowers, Risleys and freaks, took on gender-bending roles that ran counter to, but also exploited, prevailing ideals of femininity. You could see Amy as being progressive, a sign of a young woman turning her hand to something people of her gender were barred from. On the other hand, for the men in the audience, one of the big attractions of female boxing was undoubtedly, the thrill of seeing fit and energetic young women fight for their benefit.

My Granny Elizabeth also put her body to work for the entertainment of the crowd. She was an acrobat who performed tricks on the bare back of her moving horse – handstands, somersaults and other athletic, but ‘unladylike’ feats .  And she was good at it,  giving two command performances for Queen Victoria at Balmoral.

But Elizabeth’s later life tells us something perhaps a little more interesting about the role of women behind the Show-front. Accomplished as she was, her acrobatic training left her with 9 fractures to her ribs, which caused her great pain and difficulty breathing. She had four daughters with my Great Grandfather Thomas Miller (a trapeze artist) and, determined they would be spared the punishing life of an acrobat, insisted the family shift from circus into sideshows and stalls. The fact she was able to direct the family’s fortunes in this way says something about her character, but also indicates the power wielded by women within showground society in the Edwardian era.

Let’s go forward a generation now, to see how this shift to the safer climate of the fairground suited Elizabeth’s daughters. Here’s the eldest of them, Lena Miller c1918

If her cap reminds you of an engine drivers’ cap, then that’s because it is. From the age of ten, Lena was steering one of these down the narrow and windy roads of the Scottish Borders –

She was not the only woman to steer traction engines either – a number of show-women grew up steering these road-going locomotives. With Dad shoveling coal to drive the engine, and Mam usually traveling in the wagon behind (with my infant grandfather), Lena had to do her part just to literally, keep the show on the road. By all accounts she acquired a taste for traveling under her own steam and not long after this picture was taken, as steam gave way to the combustion engine, she bought herself a motorbike  so she could motor alongside the Miller’s convoy of loads.

Just shepherding these loads from place to place could be a tough job and women were important as eyes, ears and an extra pair of hands, even when traveling in the wagon at the back. When traveling the border back-roads, Lena’s younger sister Edith kept a very large block of wood handy, for the many times she had to jump out of the still moving caravan and jam it under the back wheel of the lorry whenever it stalled on a particularly steep hill. She did this well into the 1960s (her late forties) and would have continued to do so if my Dad hadn’t bought a better lorry.

Women today have to be prepared to tow caravans and other heavier loads when needed. This is nothing new. Jumping back over to mother’s side of the family, not to the Matchetts, but another show family called the Biddalls, and another Lena (my grandmother’s sister), who owned this document –

Issued by the then Glasgow Corporation, this driving licence allowed Lena to drive any motor vehicle, including the lorries that had taken over from the horses and traction engines. Now, when driving licences were introduced in 1934, all these documents said this  (it’s not the same as what would be called a Class 1 in subsequent years) but nevertheless, Lena’s family did not own a car, so she got this licence specifically so she could drive her family’s lorry and its loads. As you’ll see from the date, this is 1935, some years before the second world war, when of course women most famously, demonstrated their ability to do ‘men’s work’. Show-women were a little ahead of the curve.

And what about running the fair itself? By the time this generation of women had started their own families, the era of sideshows and its many possibilities for unusual gender roles had died out. But what had not changed was the role women played as business partners in their family firms. That women handled the money and controlled the finances was the rule, rather than the exception, which gave them considerable power, and most family fairground firms were run as partnerships between husband and wife.

A fairgoer was also more likely to interact with show-women than men. Look in a waltzer’s paybox or walk up to a stall and you’d most likely encounter one of the women in the family. Here’s Lena Biddall’s sister Lily (my Granny) at what we believe to be either the Kelvin Hall in the immediate postwar period (c1945-7) or, the blacked out fair underneath Central Station (her face was not really that pink – my mam just seemed to think it should be, and got her crayons out…)

And here, about a decade later the intrepid Edith in one of her quieter moments between leaping out of moving vehicles. In the stall you can see behind her, just off-frame is her younger sister Charlotte at the roll-a-penny-

It should be stressed though, that as well as be working mothers and aunts, these women were still expected to play traditional female roles. Fairground life allowed women to come to the forefront, but there were still tightly defined gender roles and show-women shared faced many of the same barriers as their settled counterparts. And, like their settled counterparts, they too were affected by the sweeping changes of the 1960s. This is my mother (on the left) at the advent of that particular decade, not long before she got married – 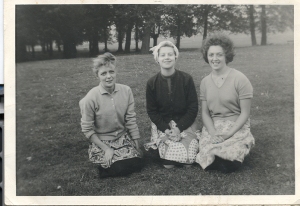 Like her mother and grandmother, Maureen Wright would expect to run both the domestic and financial affairs of her young family (which she did). But bigger changes meant she enjoyed many more social freedoms. She was a regular at the Glasgow dance-halls (winning many awards for jive dancing), played in ‘The Thistles’, a women’s football team (paired with a male Showman’s team of the same name) but also joined her friends, unchaperoned on several ladies trips to London, Blackpool and the like. Here’s a close encounter between mam and a pigeon at Trafalgar Square- 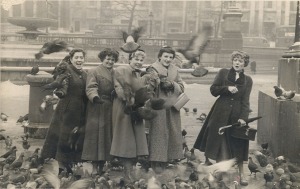 History does not record what was said between woman and bird, but what is interesting about this image, I think, is how it shows the confidence and growing independence of mam’s generation of show-women who blended the traditional power they held in their community with rock and roll and generally improved standards of living.

This image records the Ladies Night trip to London, a group of show-women who got together as regularly as the season would allow, to socialise and plan an annual ‘do’. My own father remembers that about ten years earlier, his cousin would not be allowed to go anywhere without a male cousin to chaperone, whereas by this time, such trips were perfectly routine, a reminder that although it is something of a world to itself, the showground also moved with the times. Nevertheless, the showground was also in some areas much more resistant and conservative towards social change.

And that’s probably a good place to leave this story and invite comment, correction and discussion. As a final point – take a look at this picture of Amy and Elizabeth’s great granddaughter at work in the very same stall we met Charlotte in above (still in active service after over 100 years of use!)